I am super excited for this post, because it is an awesome collaboration series I'm doing with Minae from Minae's Magical Nation. She's super sweet and I'm just in love with her blog. Twice a month will be posting anime themed entrees, and for our first one we decided on sharing our Top 10 Favorite Female Anime Characters. Today you'll experience me at my rawest fangirl state, since I love all of the characters I'm about to talk about so much, and hopefully you enjoy it. Also there will be some spoilers. So let's start~~!

Pandora Hearts is one of my favorite anime, because it has connections to Alice and Wonderland. I am in love with Alice because of her really unique backstory, which I am about to spoil. Alice has a twin sister who is in the Abyss, another dimension, who sometimes possesses her, without anyone knowing. This leads to people taking advantage of her, by teaming up with her sister, so Alice kills herself to prevent her sister from possessing her. Alice is reborn and that Alice is the one seen in the anime and the beginning of the manga. She is stubborn, but really caring. She's super protective of Oz, especially when Oz's friend Gil is around, and those scenes are hilarious to watch. I am catching up on the manga, which I think ended recently, and Alice is just amazing in it.

9.) Mina Tepes from Dance in the Vampire Bund 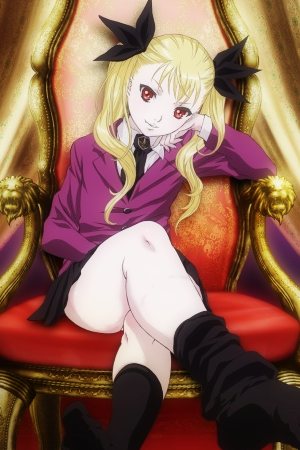 Dance is the Vampire Bund isn't a super well known anime, but it is one of the best vampire anime I've ever seen. I'm in love with the main character, Mina Tepes, the daughter of Dracula. That may sound super cliche, and now you may think Mina is just like your average Twilight vampire, but she is nothing even comparable to them. She has a two sided personality, if she's on your side she is calm and sympathetic. However if you're not on her side, she is ferocious and will do anything to get what she wants. Her backstory is amazing, it has to do with why she looks like a child even though she's over 400 years old, and it has a lot to do with the plot of the anime, so I won't spoil it in case you choose to check it out. I am planning on reading the manga, because I want to see how the plot continues after the anime.

I know not everyone liked the Dangan Ronpa anime, but I saw the anime first and then played the game, and I still love it. This should have been obvious, since I do cosplay Touko Fukawa. She is an author who along with the other students is trapped in a battle royale inside their high school. She's socially awkward, and she has an insane crush on Byakuya Togami, it's super one sided. Fukawa isn't just that, again spoilers, but she has multiple personality disorder, and her other personality is a serial killer, Genocider Syo. Even though, Syo's personality is literally the exact opposite of Fukawa's they both want Togami, which is the only thing they have in common. They are both really entertaining characters in both the anime and the video game to watch, and I'm excited to see the English dub of the anime. 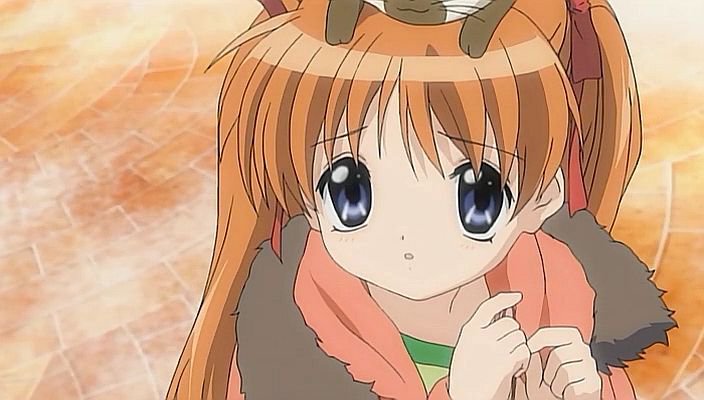 First off, Makoto is just so cute. Initially she's super feisty, but soon calms down in nature as she grows closer to the main character, Yuichi, and his family. Kanon is one of two anime I've ever legitimately cried while watching, and Makoto is the reason for it. Spoilers, Makoto is actually a fox that Yuichi took care of as a kid. Makoto wanted so badly to see Yuichi again, that she gave up her memories in order to become human. However in becoming human, Makoto is slowly dying. It is the most heartbreaking few episodes to watch, because she's just growing weaker and loses the ability to speak. Even though she has the saddest end, she is the most lively character, and she is super hilarious in other scenes in the anime. 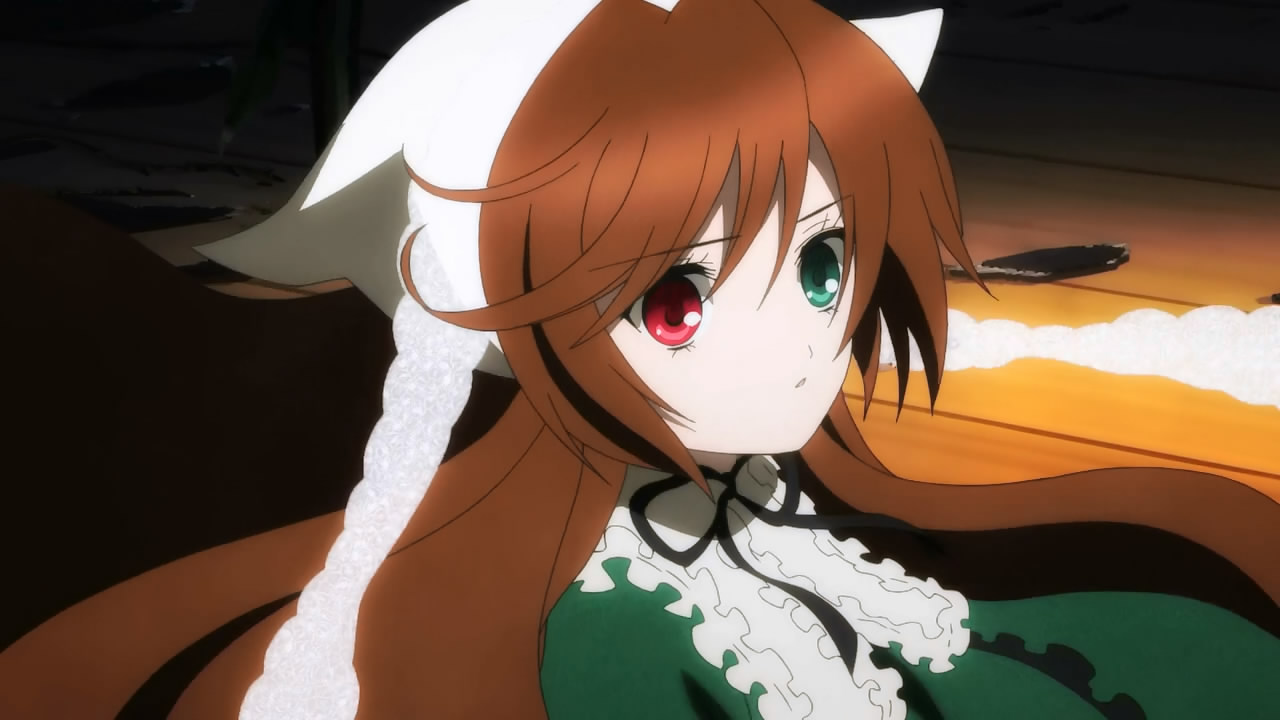 I have talked about Rozen Maiden in other posts on my blog, so of course I have at least one of the dolls on this list. Suiseiseki is my favorite out of the seven dolls. She's introduced as the shyest of the dolls and is distrustful of humans. But once she trusts Jun, she becomes super mischievous and she often teases Jun or Hina Ichigo. She does care a lot for the other dolls, especially her twin, Souseiseki, and is is very protective of them whenever danger is present. Her character really has developed over the three seasons of this anime, and I'm hoping for a fourth to see where her character goes.

5.) Shinoa from Seraph of the End: Vampire Reign

I recently started this anime after hearing about it online, and I am already in love with it, especially Shinoa. First of all, she's just so cute~!! I love her design, and she has a giant scythe, which makes her super bad ass. Her personality doesn't fit her cute design, she's super smug in showing how she's superior, title and power wise, to the main character, Yuichiro. I am really excited to see how she continues to develop as I continue watching the anime and when the second half of it comes out in the fall. Also I'm already planning on cosplaying her. I talked about my love of the Gun Gale Online arc on previous blog posts and the reason why I love it is because of Shino/Sinon. Her backstory, how it affects her, and how she tries to recover was something I really connected to. Not many characters in anime realistically depict anxiety, in my opinion, but I think this anime really handled Shino/Sinon's fear of guns amazingly. The scene in the beginning when another girl torments Shino/Sinon by making a finger gun is so well done. Overall Shino/Sinon's character is so realistically done that I really felt for her in the more emotional scenes. 11eyes is an anime that really deserves a larger fan base. It is really unique and very well done in terms of plot and characters. I love a lot of the characters, but my favorite has to be Yukiko. She seems really innocent and cheerful, but if she takes off her glasses she becomes a cold hearted killing machine. I just realized that she is similar to Touko Fukawa from Dangan Ronpa . . . Are killers with glasses my type~? Anyway Yukiko really does develop from a basic and common seeming character to an emotionally driven character because of her relationship with Takahisa. I really want to play the game this anime is based on, since I heard she is more of a main character then. 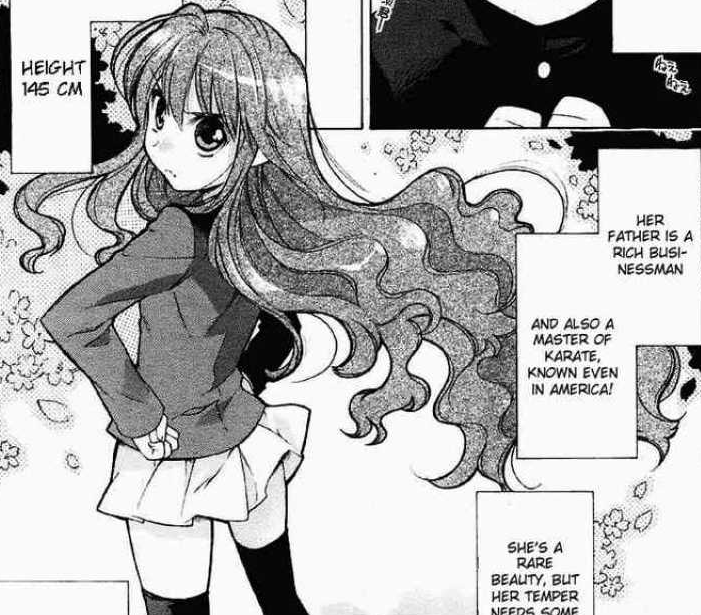 In one of my 30 Day Anime Challenge posts I said I felt the most like Taiga Aisaka from ToraDora. It may sound self absorbed then that I like her so much, but there is good reason for her being so high on this list. Out of all the romance anime I've seen, she is my favorite female love interest ever. In many romance anime, in my opinion, the plots are very cliche, often with the love interests getting really close to getting together and then a misunderstanding leads to them separating and then they get together in the end.  ToraDora doesn't do that and that's one of the reasons why I love Taiga. She's not the typical love interest because the anime doesn't treat her as a romance driven character, like I see in a lot of anime. She's a very comedic character who has her moments where she's super emotional or romantic. That's what I really like about her, that she's a love interest but not just a love interest. She goes through a lot of character development, and in the anime you really see all the sides to her personality. In my opinion she's the most fleshed out love interest I've seen in an anime. Also I just like that we are the same height, look the same, and her voice actor and I have the same birthday. 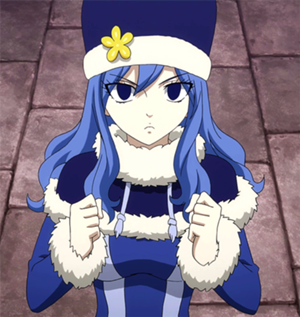 If you have been reading my blog, you probably we expecting Juvia to appear somewhere on this list. Yes, my favorite female anime character is Juvia Lockser from Fairy Tail. Initially I wasn't a huge fan of Fairy Tail, and on numerous occasions I tried to watch it. I liked it, but there weren't any characters I really enjoyed. That was until the Phantom Lord arc where Juvia was introduced as a villain.  Initially Juvia is emotionless and isolated, even from the other members in Phantom Lord. She was always followed by the rain, which made no one want to be with her, which caused her to have a lack of trust in people and to be depressed. However, upon fighting Gray, she learns to be a very hopeful and optimistic character and she joins Fairy Tail so she can be with him. She's madly in love with Gray and is extremely protective of him. Whenever anyone threatens him, she turns somewhat sadistic and becomes more possessive over Gray. At the same time she is one of the funniest characters to watch. I love all her scenes where she does something to make Gray love her and it just doesn't work out. Juvia's fantasies about her and Gray are hilarious. Also I've been reading the manga, which I won't spoil because I do want people to read it, recently Juvia has gone through a lot and she at the same time manages to light up the mood. Thinking about it, that's probably why I love Juvia so much, because she is always hopeful. Being a pessimist and an anime lover, seeing a character that resonates with me have a transformation in their outlook, to a more positive one, is inspiring. Now you might think it's stupid for me to feel inspired to think more positively by an anime character, or in more general terms, a fictional character, but I personally don't have a "real" role model. Yes, there are people I look up to, but none of whom really changed how I feel as a person. Juvia somehow was able to do that for me and it amazes me that an anime character could do that for me. Wow this just got really philosophical and I don't know what to do . . .  I cosplayed her at Anime Boston this year and it was the happiest experience of my life. Being able to portray what made me a happier person to everyone else, made me feel the happiest I've ever felt in my life. Also she's just so cute, and she's made me want blue hair <33


Those were my top ten female anime characters and I hope you guys enjoyed it~! Check out Minae's post on her blog to see her top ten and in the comments let me know who your favorite female anime character are. Also leave suggestions for future anime themed topics that Minae and I can talk about in our collaboration series. Thank you guys so much for reading and I'll see you at my next post.